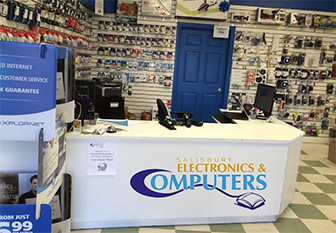 Salisbury Electronics & Computers has become a varied mixture of sales and service; it is an institution that helps take you from yesterday into tomorrow. It offers everything from record needles to computer peripherals. SC&E sells items such as: new and used computers, laptops, and monitors, ink cartridges, batteries, CDs/DVDs, remotes, printers, an assortment of cables, phones and gadgets of all kinds. Also, for kids and avid collectors there is a large selection of remote control cars, trucks planes and rockets.

On June 1, 2003 SE&C grew to the point where a substantial location change was needed, it was on this date that the business moved from the small building outside of Patrick’s home to a unit in the Salisbury mall. A few short months later, in November SE&C became and Radio Shack Direct Dealer (now The Source), steadily bringing in their line of unique electronic products. With continued growth throughout the years the business was incorporated under the name Make It Last Inc, this occurred in 2009. Over the following three years there was even more growth which warranted a move to SE&C current location. Salisbury Electronics & Computers now resides and on 3134 Main street where it continues to grow and serve the rural community.

Salisbury Electronics & Computers has been happy to serve the Salisbury and surrounding communities for almost 14 years and are glad to continue doing so for years to come.